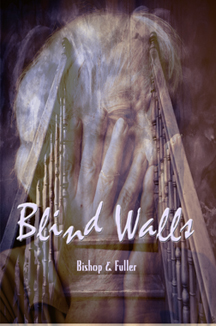 Blind Walls – It’s a monstrous maze of a mansion, built by a grief-ridden heiress. A tour guide, about to retire, has given his spiel for so many years that he’s gone blind. On this last tour, he’s slammed with second sight. He sees the ghosts he’s always felt were there: the bedeviled heiress, her servants, and a young carpenter who lands his dream job only to become a lifelong slave to her obsession. The workman’s wife struggles to make it to shore, but he’s cast adrift. And the tour guide comes home to his cat.

It’s a horror story and a tragedy, with elements of romance and fantasy mixed in. . . . it’s the house, with its ghostly inhabitants, that is the true focus. The narrative surrounding Chuck and his wife and the subsequent unraveling of their lives is well written and engaging. , , , A retelling of a well-known mystery that offers a few twists on the original.
—Kirkus Reviews

The pairing of Bishop and Fuller is a magical one. . . . It’s a brilliant opus, melding the past, present, and future with intimate, individual viewpoints from a tightly arrayed cast of believable characters in as eerie a setting as might be dredged out of everyman’s subconscious searching. . . . Blind Walls offers a weird alternative world, featuring a blind man with second sight and an acerbic wit as its charming, empathetic hero.
—Feathered Quill

Blind Walls is a beautiful, poignant story that has many layers to it. It’s one of those books that weaves its magic around you and attaches itself to you in an oddly compelling way.
—Archaeolibrarian

BLIND WALLS is a masterful and eerie tale of obsession, increasing madness, and deepening sadness, surrounding the haphazard construction of a haunted house. It’s a fine and engaging read, a page turner that will not allow readers to put it down without finishing to the very end.
—IndieReader

This story, told by a blind man, offers clear, sharp insight into the lives of the people who lived in the mansion and whose spirits ensure that it remains vital in the reality of today. … A vivid quilt, the pattern of which mirrors the happiness, sadness, loss, and madness of these people. … These characters are so well developed that one has to think of them as live people – laughing with them and crying with them, even getting old with them. This is an amazing story based on the Winchester Mansion and told with such quiet, compelling, raw humanity that the reader simply can’t stop until the entire tale is told. A wonderful, spooky look into others’ lives and what may or may not happen on any given day.
—Dog-Eared Reviews

Bishop and Fuller have constructed a story rich with imagined detail and visionary ideas about life’s possibilities. The cast of ghostly characters, servants, workman, and family light up the story with dramatic effect as their actions and choices are observed. . . . The authors’ prose is effortless and moves easily from humorous to weighted seriousness. The dialogue is perceptive, giving voice to compelling characters and particularly to the tour guide whose second sight he confers on the readers. The latter will not want to look away from the myriad rooms of Weatherlee House.
—US Review of Books

I got so caught up in these characters’ lives, loves, and heartbreaks. … I loved the insights into the inner workings of obsession, not only on the part of Mrs. Weatherlee, but also on the people she comes in contact with, and how this obsession affects everyone it touches.
—Long & Short Reviews

Innocent, likable characters who are drawn by the hands of experts. Every character in this novel is unique, and we are made to see each of their points of view. … . I recommend this story for people who love memorable characters and settings and stories told without holding back the punches.
—Travel the Ages

Bishop & Fuller have done it again! In their new novel, Blind Walls, the lives of an eccentric cast of characters collide in unexpected and often very moving ways to create a rich meditation on guilt, obsession, devotion, and the fluidity of time. Alive with fresh observations and vivid language, this novel is a pleasure from beginning to end.
—Jean Hegland, author of STILL TIME