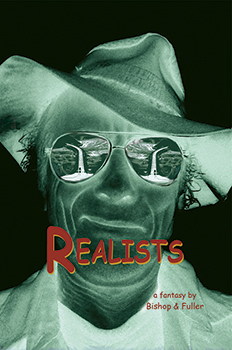 In the near future, insane politicos reign and dreams are taboo. A motley band of innocents, targeted as terrorists, plunge to certain death, but by a stroke of lunatic physics plop onto Smoky’s ramshackle westbound tour bus, pursued by an empire gone loco.

Amid ghost buffalo and disappearing cities, improbable lovers split and rejoin, children find magic, and a ragtag bunch of loners and seekers bond into a tribe of survivors, weaving a new reality with magic as the warp, love as the woof.

Anyone who loves Kurt Vonnegut, Ray Bradbury, Phillip K. Dick, Phillip José Farmer and other masters of satirical, dystopian-yet-humanistic, hilarious and sexy sci-fi will find considerable delight in this rip-roaring, picaresque yarn.  Bishop & Fuller manage to create a momentum that never flags. True, the novel weaves together many threads, but ultimately they form a rich and satisfying tapestry. “Realists” reminded me of how much pure fun reading can be. It’s been a while since I felt a sense of loss when a book ended, but I actually miss these characters and their journey.

Reading REALISTS, then, is like staying up into the wee hours, surrounded by the spoils of a wild party, drinking booze from many tumblers and listening to some very clever, insightful, and verbally gifted people extemporize together.

Each thread of this strange dystopian tapestry is worth tugging on and following. But it’s the pungency of the social satire that really got me. Amazon’s clicky-choose-one-review-boxes apparently don’t believe that something can be both “Dark” and “Hopeful” — I chose “dark” – but really, it is both.

Bishop and Fuller have entertained with this psycho-mythic tale of a wild bus ride across America, reminiscent of the psychedelic 1960s. But, by projecting the 1984-type scenario all liberals, especially, fear, they have also made some serious political and social comments on the dysfunctional state of our culture in the present, all viewed through the ironic lens of an Independent Eye.

Realists is a road trip in the Twilight Zone, with hints of Groucho, Sartre and the Circus of Dr. Lao. A cameo appearance by a dark goddess and, on rare occasions, by little green men, dignify, then destroy any probability of a neat ending with a moral or a take-home message. But none of that is needed. Realists is worth reading and reading again, tucking little slips of paper between the pages to laugh again and again and to cringe at the deeply cynical view of some future America, maybe ours, maybe not.

This is a thinking persons urban fantasy novel written in a style that reminds me of Kurt Vonnegut meets Neil Gaiman meets Christopher Nolan. Once started, I couldn’t put this book down and dreaded the moment I’d be finished with it. The book is mesmerizing, hypnotic, poetic. Truly, this book me laugh. It made me cry. Most of all, it made me think.

I’m an abstract painter, iconoclast and abnormal citizen hanging on to the fringes of whatever we used to call civilized society. As such, this book is a treasure trove of purposeful commentary, dark humor, nervous intrigue, offering up surreal glimpses of the planet we inhabit – and I love it! The highest compliment I can give is that this novel makes me feel like painting, and that’s as good as it gets!